I Want To Be Rich

Before I begin sharing the wonderful message that I got out of today’s passage I want to quickly explain the context of the story. There was a battle that took place between 4 allied kingdoms (Shinar, Ellasar, Elam and Goiim) and 5 other allied kingdoms (Sodom, Gomorrah, Admah, Zeboiim and Bela – also known as Zoar). For 12 years the 5 latter kingdoms were subject to the kingdom of Elam but in the 13th year they rebelled. The King of Elam allied with the other 3 kings and went out to defeat the 5 kingdoms. The battle between these 2 groups took place in the 14th year, and the 5 kingdoms that had rebelled were defeated; their goods, food and people were seized… including Lot (Abram’s nephew) and his family. When Abram (not yet named Abraham) was told about this he called out 318 of his trained men and at night attacked and defeated the 4 kings. He recovered all the goods and brought back his relative Lot and his possessions, together with the other people. The 5 kings that had been defeated then allied with Abram… and then this event took place:

“Then Melchizedek king of Salem brought out bread and wine; he was the priest of God Most High. And he blessed him and said: “Blessed be Abram of God Most High, Possessor of heaven and earth; And blessed be God Most High, Who has delivered your enemies into your hand.” And he [Abram] gave him [Melchizedek] a tithe of all.

And the king of Sodom went out to meet him at the Valley of Shaveh (that is, the King’s Valley), after his return from the defeat of Chedorlaomer and the kings who were with him. Now the king of Sodom said to Abram, “Give me the persons, and take the goods for yourself.” But Abram said to the king of Sodom, “I have raised my hand to the Lord, God Most High, the Possessor of heaven and earth, that I will take nothing, from a thread to a sandal strap, and that I will not take anything that is yours, lest you should say, ‘I have made Abram rich’— except only what the young men have eaten, and the portion of the men who went with me: Aner, Eshcol, and Mamre; let them take their portion.”

God used the wonderful symbolism in this passage to share a personal message with me, and I want to share it with you too. This passage really shows how tightly knit the Old and New Testaments are and how God truly is never-changing. 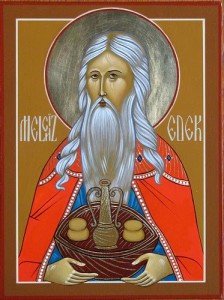 Melchizedek (God/ representative of God): The character of Melchizedek is extremely unique in the Bible and this is the first time we hear of him in Scripture. The Church has 2 opinions regarding Melchizedek: some believe that He is God Himself and others believe that he is a representative of God. (Personally I feel that He is God). It’s amazing to hear of someone other than Abraham at this time that knew God. It’s even more incredible that not only was he the King of Salem (meaning ‘King of Peace’) but that he was also the Priest of God Most High – which technically could not have taken place as priests came only from the tribe of Levi and kings were from the tribe of Judah of the house of David.

Also priesthood had not yet been established during Abraham’s time; that role later came through Aaron, Moses’ brother, and his descendants. It is clear though through this passage that Melchizedek is greater than Abraham because he blessed him. Psalm 110:4 says “The Lord has sworn and will not relent, You are a priest forever according to the order of Melchizedek” referring to Jesus Christ the Messiah who is a king from the tribe of Judah and a priest, not according to the order of Aaron but of Melchizedek, offering the sacrifice of bread (referring to LIFE in the old testament) and wine (referring to JOY in the old testament) not of animals.

What really touched me about this passage was seeing God’s worth in Abraham’s eyes – how much He valued his Creator. God Himself met with Abraham to tell him how proud He was of Him… God was overjoyed and chose to reveal to Abraham a mystery completely out of his physical time and beyond his understanding. What a privilege and great reward for Abraham that God Himself wanted to celebrate with him? And when I think about it what a privilege do we, the Church of the New Testament, have in celebrating the Eucharist with Christ every single week. “…Even angels long to look into these things.” 1 Peter 1:12. In Abraham’s eyes, meeting with The Lord was in itself the greatest and most unimaginable reward he could dream of. In the same way we come out of the battlefield of the world and approach the Lord to celebrate the Eucharist and be strengthened by Him; giving Him what is ours and receiving what is His.

After leaving the presence of Melchizedek, Abraham was encountered by the King of Sodom, who symbolises Satan. This is exactly what happens to us; after spending time with the Lord we need to expect the enemy to attack… very slyly. The king offers a bargain to Abraham; to keep all the possessions and plunder of his victory, but to give him the peoples, the souls of the defeated. This was a test of materialism for Abraham and he passed – he passed test after test because of his love for the Lord His God. “A faith that is not tested cannot be trusted”. Satan couldn’t care less about money or possessions, he wants souls. He’s hungry for souls… if only we can learn to be really hungry for people’s souls. Abraham’s eyes were forever fixed on the Lord. Though it was technically not wrong for him to take possession of all the goods that he rightfully had won from his defeated enemies, he wanted nothing to do with it. He said “I have raised my hand to the Lord, God Most High, the Possessor of heaven and earth, that I will take nothing, from a thread to a sandal strap, and that I will not take anything that is yours” – a man that wasn’t going to give room for bargains or discussion with the enemy. He valued His God, He knew from the depth of his heart that His God was the Possessor of all heaven and earth and could easily reward him with far better riches if He wished to. Abraham really knew God.

Imagine how God must have felt in that moment? I picture the Lord watching Abraham closely waiting for him to overcome this test and feeling overjoyed with tears of pride when He sees that His son, His creation whom He loves unconditionally, has recognised that nothing that this ‘king of Sodom’ can offer him stands in comparison with what the King of Peace, Possessor of heaven and earth can easily offer him. I think this is why Abraham is such an incredible man of God – to him God wasn’t a part of his life, He was his life. Abraham recognised that the king of Sodom was an ungodly man ruling an ungodly city and he chose the path of holiness; he chose to be be set apart from anything that was not holy. If something is not holy it’s bad, and if it’s not godly it’s bad. Simple.

Like Abraham I need to forsake anything that the world tries to lure me with, anything that tries diminishing God’s worth in my heart. It’s just simply not worth it. If I want to be rich, God can make me rich without me even asking Him – not the world, not Satan. My Father is so rich. If it’s not 1000% from Him I want nothing to do with it. Like Abraham my real richness needs to be Christ Himself. My portion, my gain, my spoil is Jesus.

“My flesh and my heart may fail, but God is the strength of my heart and my portion forever.”
Psalm 73:26

<b>Helloooo there!</b> Nice to meet you - I'm Michael! I'm a massive worship enthusiast; I love discovering new music and if we end up being friends you'll probably end up with a music album mailed to your house within a week of getting to know me. I love dabbing my fingers in a cheeky bit of photography and typography. To me, a picture alone doesn't paint a thousand words, rather in pictures and words I hear the melody of a thousand symphonies. I'm also a massive lover of animals! I have a pet bunny called Joel and we have frequent chats about life because we're close like that; he's practically my counselor. I see the immense beauty and simplicity of the divine in animals, and that's what I want to share with you more than anything through my posts; that every aspect of our lives, no matter how 'small' or 'insignificant' it may seem, is truly divine. My deepest desire is for you to hear that you are ferociously loved, even when you feel broken and dead in spirit. Join me on my journey to Become Fully Alive; striving to live in a state of awareness, at all times, of the presence of the Lord within me and around me. I want to build a temple for the One my soul longs for, in the depth of my heart, so I can hear Him tell me: <em>"I have heard the prayer and plea you have made before me; I have consecrated this temple, which you have built, by putting my Name there forever. My eyes and my heart will always be there." 1 Kings 9:3</em>

Why Are Most Of Your Friends Girls?
The Still Waters
Did I Make The Right Choice?
Trial and Temptation
Nifuna, Nifuna, Nifuna
A New Season Has Begun
Love Your Soul
Vulnerability: Unveiled
Two Processions